Dilistone Group is pleased to update the market on early developments at its new subsidiary "GatedTalent".

GatedTalent, launched on 9 October 2017 at the World Executive Search Congress, is a new private network designed to allow executives to share information with recruiters in a private manner while also assisting recruiters in their GDPR compliance.  The GatedTalent platform enables executives to ensure their data is always up to date and can only be shared with recruiters of their choice.  This change of emphasis gives both executives and recruiters unparalleled confidence in the quality of the network.

With initial demand for the platform driven by GDPR compliance, the Board is pleased to report that by the end of November, contracts had been received from firms in more than a dozen countries across the European continent.  Pleasingly, a number of additional contracts have been won with businesses based outside of the EU who see the value in the new portal as a way of increasing engagement with candidates.

In the UK alone, contracts have now been signed with more than 20 firms with clients including generalist executive search firms along with boutiques in niches as diverse as Board Search, Financial Services, Technology and Pharmaceuticals.

Clients on the platform will essentially be sending invitations to senior level executives, inviting them to join the GatedTalent network.  Many of the early adopters operate internationally, meaning that invitations can be expected to be sent to a truly global executive pool.

The platform has already received registrations from executives based in Europe, Asia, Australia, the Middle East and both North and South America.  While revenue in 2018 will largely be generated by Search firm subscriptions, longer term financial performance of the business will be derived from the size and quality of the executive database.  In planning for the platform, the Board anticipated that our clients would send in excess of 1,000,000 invitations to executives by March 2018 and that a certain percentage of these would create profiles.  Based on the volume, nature and expected usage of the firms that have signed, or are expected to sign to implement the platform, the Board is increasingly confident that it will achieve and very significantly beat this target. It remains too early to estimate the conversion rate of invitations to profiles.

The Board is also pleased to note that GatedTalent clients include firms that are currently using the Dillistone Systems' FileFinder Anywhere platform; firms on legacy versions of FileFinder who will be upgrading to the latest version of the platform; and firms that have not previously been clients of the Group and will be adopting FileFinder alongside GatedTalent.

Indeed, the speed of client acquisition makes GatedTalent the fastest selling new product in the history of the Group.

Jason Starr, CEO of Dillistone Group Plc, said - "We are delighted that so many of our clients see GatedTalent in the way that we do - as a way to convert the challenges of GDPR into an opportunity to increase engagement with candidates.  We are well on our way to building the World's largest private executive network of this type and are increasingly confident that GatedTalent will be transformational for the global executive search industry and for our Group." 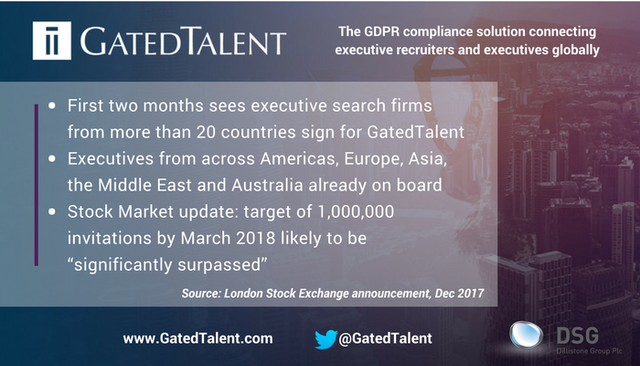