Having started his career as a graduate in the UK retail sector, Matthew joined an international executive recruiter to help launch their retail business. He subsequently joined a prominent International search firm to head up its Consumer Practice in the Middle East. On his return to the UK, Matthew joined Dixons Retail and was responsible for the appointment of both Board and senior executives during one of the country’s leading retail turnarounds. He has since worked with prominent businesses in appointing their Boards and Senior Leadership teams.

Parry’s main focus with be on expanding the retail executive search, covering all areas of retail, hospitality and leisure in the C-Suite and board recruitment.

Jean-Pierre ‘JP’ Gadsdon along with Jane Carver commence as Associate Directors. Gadsdon has a long and accomplished history within the Talent Acquisition domain, working with some of the UK’s leading Retailers and Hospitality brands, working for George at ASDA, moving on to FatFace, Carluccio’s and River Island.

Carver trained in Retail Buying with Arcadia Group and Etam, before transferring her skills to HQ talent acquisition. With 11 years agency recruitment under her belt, Jane moved in house to lead the talent teams of Calvin Klein, Jaeger and Clarks where she specialised in growing and developing their direct talent acquisition strategies, executive recruitment and partnering with the people teams to support their retention and succession planning both across the UK and Europe.

Richard Hollister Managing Partner of Retail Executives Limited said; “Matthew brings to the firm a wealth of invaluable experience of not just executing senior board levels roles but acquiring and retaining client and candidate relationships. Matthew has the same ethos as the rest of the team in making this the number one Retail Executive Search firm and being candidate focussed. Matthew will build up a team of highly skilled recruiters to grow the firm.

Darren Topp Chairman said; I would like to welcome Matt, Jane and JP to Retail Executives. Richard is building a world-class team as we look to build the retail executives business with our clear candidate focussed strategy which delivers the very best talent to our clients.

Retail executives will be announcing other senior industry hires over the coming weeks. Parry, Carver and Gadsdon will start with immediate effect.

Other recent hires include, Sarah Gillett an experienced Human Resources Director within the retail and hospitality sectors, who has been appointed Non-Executive Director.

Retail Executives Limited was formed in 2018 by Richard Hollister a veteran of the recruitment industry, previously having worked at three of the top global executive search firms. Unlike other executive recruiters, the firm employs senior fashion and retail executives. 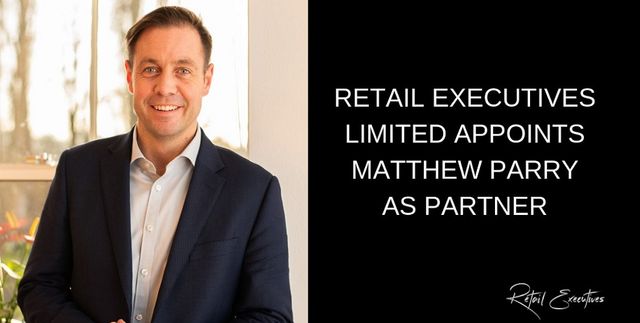 We are excited to announce that we've appointed Matthew Parry as Partner! Parry’s main focus will be expanding the retail executive search, covering all areas of retail, hospitality and leisure in the C-Suite and board recruitment. pic.twitter.com/B87KODuNQr