The team is strengthened by Marcello Marcellini as Partner, two Associate Partners, Massimo Misticoni and Marco Saltalamacchia, as well as Gabriella Espertini as Consultant.

“We are all very excited to have now such an experienced group of professionals in Italy”, says Dr. Bernd Prasuhn, Chairman of Ward Howell International. The competence and experience of the team is extensive and rooted in decades of experience in the executive search industry.

“After many years in the executive search business, I have been very positively surprised to have found in Ward Howell such enthusiastic and innovative approach to the business. Today competence, engagement, speed, flexibility but also self-confidence are crucial and I really found them in Ward Howell.” Luigi Mancioppi

“I am a Head Hunter and a Sommelier, too. They are apparently different, but substantially with a common target: finding an ideal candidate (right competencies, correct behavior, soft skills) for a company and combining the right wine (soft, scented, balanced, harmonious) with each type of food. In Ward Howell, I am discovering the appropriate “context” to growing with candidates and companies … as the “ground” ideal for grapes.” Marcello Marcellini

“Italy is the second European Manufacturing Country after Germany and 85% of companies are family-owned. Together with my Partners of the Ward Howell Family Business Practice, I can better accompany our Italian clients in the internationalization of Made in Italy,” Vito Gioia

Luigi started his career in human resources with IBM holding the senior position of employee relations manager for marketing personnel, working also in the USA headquarters. Subsequently, he was personnel director, Southern Europe, of GE Information Services and director of personnel and organization for the fine chemical activities of the ENI Group. He has successfully completed more than 400 projects in his executive search career. His experience in search spans over almost twenty years with Amrop where he was partner and chairman of Amrop in Italy before joining Ward Howell. Luigi holds a degree in business administration from the University of Pavia. He is fluent in Italian and English.

He started his career working in Ruder Finn and subsequently joined PWC where he successfully set up and managed the HR Consulting Division providing leadership solutions and executive search services. In the 1990s he focused his career in executive search with international firms like Carrè Orban (subsequently KF) and TASA International (subsequently TMP) where he was both equity partner and managing director Italy for many years. Prior to joining Ward Howell Vito was with Amrop for 11 years and managing director Italy. Vito has consolidated experience and is used to work both for multinational and domestic clients in many industries and particularly for family businesses. Having successfully conducted searches for many years in numerous different industries Vito brings a unique insight to the talent-starved and challenging market. Vito’s expertise is steering highly sought talent to rapidly growing companies, by engaging and building trusted relationships, and being a thought leader for both candidates and employers. Vito’s academic background is in accounting and economics and includes master courses at Ashridge Management College UK and Loyola University of Chicago. Vito speaks fluent English.

Marcello has over 20 years of experience in global executive search industry. After 10 years spent in Honeywell Information Systems as human resources director, he started his search career at Tasa International (then TMP Worldwide Executive Search) in Italy in 1991 until 2000, executing senior executive searches in multinational technology and manufacturing companies. In 2000 he continued the same executive activities in Heidrick & Struggles and then, from 2003, in Amrop, before joining Ward Howell. Marcello consulting practice is focused on the Digital/Technology, Industrial and Life Sciences practices and in these sectors he handled most of the senior level management positions for local and multinational companies. He holds an honor degree in Economics & Statistics from the University of Rome and he speaks English and Italian fluently.

He started in Procter & Gamble in the Marketing area. Massimo spent 15 years in Playtex International, where he was Marketing Director Spain, Managing Director Italy and Vice President Europe. Massimo then moved to Fideuram (leader in the Private Banking sector in Italy) as General Manager and member of the Board of controlled companies. Lastly, he was managing director of Buffetti Group. He started in the executive search field in 1994, as partner of TASA International and since 2018 he has been partner of Amrop, before joining Ward Howell Italy. Massimo holds a degree in law from the Bologna University. He subsequently attended an MBA course at Padova University. His main focus is in the consumer, private banking, industrial and automotive sectors. Massimo is a highly qualified professional, with a significant background in management and executive search and consolidated experience in Italian and International business. He speaks English and Spanish.

Marco’s career development started in the industry where he spent 25 years before entering the consulting business, especially focusing in the automotive business. His last position was Senior Vice President of BMW AG in charge for the European Region. He came from Fiat Auto (currently FCA), where he held the position of Vice President for the Worldwide Fleet & Corporate Business. Previously, he held various positions at Renault where his last appointment was director at the Paris headquarter in charge for the international network development. In 2010, after more twenty-five years in industry, Marco moved into the business and investment consulting, founding his own company and contributing to the creation of several start-up’s. Marco graduated with honors in Statistics and Economics diploma (B.Sc.). Before graduating in 1983, he had the chance of further specializations in Marketing and Computer Science at the Georgetown University in Washington (D.C.) and the Lebanon Valley College in Annville (Pennsylvania). After working as a R&D statistician at Nielsen A.C., he added a diploma with honors in Business Administration from the Bocconi University in Milan. He also joined the INSEAD Business School CEDEP program in Fontainebleau (France) in 1994.  In 2007 awarded from G. Napolitano, President of Italy, with the Honorary Title of “Ufficiale” of the Order of Merit of Italian Republic. Four European Languages fluently spoken (English, German, French and Italian) and a basic knowledge of Spanish.

Gabriella has been working in the executive search for 25 years. She started her experience at Tasa International, a Swiss multinational, and later moved to the American group TMP Worldwide. After a couple of years, she participated in the start-up of Asa Executive Search. Before joining Ward Howell, she worked at Amrop Italy. She is a generalist and she handled several assignments both at national and international level. Her experience spans a wide variety of sectors and functional areas, but she is particularly expert in industrial, financial services and consumer/retail. She has good relationship skills and sociable character. These skills combined with her professional knowledge enable her to complete the assignments successfully, finding the best solution for the client. Gabriella speaks Italian, English and French. 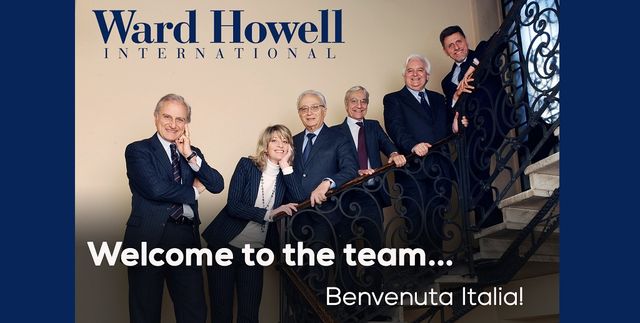